WASHINGTON, DC – The U.S. Department of Labor has selected Scott Ketcham as its new director of the Occupational Safety and Health Administration’s (OSHA’s) Directorate of Construction (DOC) in Washington, D.C. Ketcham had served as deputy director of DOC since February 2017. 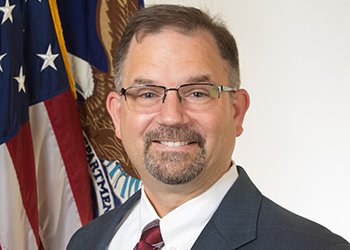 Prior to coming to OSHA’s national office, Ketcham worked for 19 years as an OSHA acting deputy regional administrator, area director, assistant area director, and compliance officer and manager in offices in the Seattle, Dallas and Philadelphia regions. Before joining OSHA, he spent five years as a staff industrial hygienist with the U.S. Army Medical Activity at Bassett Army Hospital on Ft. Wainwright, Alaska. He retired from the U.S. Army after 24 years of active and reserve service.
Ketcham holds a master’s degree in Public Administration from the University of Alaska, a Bachelor’s of Science degree from Texas A&M University, and is a Certified Safety Professional. He has a background in the general industry, maritime and construction industries.
“Scott Ketcham is a dedicated public servant,” said Loren Sweatt, principal deputy assistant secretary for Occupational Safety and Health. “He has demonstrated strong leadership throughout his OSHA career, and I am confident he will continue to achieve the mission of assuring safe and healthful working conditions for construction workers in his new position.”

WASHINGTON, DC – A Department of Defense briefing revealed a commitment from the U.S. military to transfer $3.6 billion to the Department of the Army for construction of 11 wall segments along the U.S-Mexico border. Jonathan Hoffman, assistant to the secretary of defense for public affairs, made the comments earlier this month during the briefing. Defense Secretary Mark Esper justified the wall projects as necessary to support military personnel at the border in light of President Trump’s national emergency declaration.