ARLINGTON, VA – The price of materials and services used in nonresidential construction jumped 1.1 percent last month, outpacing the rise in contractors’ bid prices, according to an analysis by the Associated General Contractors of America of government data. Association officials warned that rising materials prices were having an adverse impact on a growing number of construction projects that have suddenly become more expensive.

“Some materials prices have fallen recently but others appear headed for further increases,” said Ken Simonson, the association’s chief economist. “Since these prices were collected, producers of gypsum, concrete, and other products have announced or implemented new increases. In addition, the supply chain remains fragile and persistent difficulties filling job openings mean construction costs are likely to remain elevated despite declines in some prices.”

The producer price index for inputs to nonresidential construction–the prices charged by goods producers and service providers such as distributors and transportation firms—jumped 1.1 percent from May to June and 16.8 percent since June 2021. Meanwhile, the index for new nonresidential building construction—a measure of what contractors calculate they would charge to erect five types of nonresidential buildings—climbed by 0.5 percent from May to June and 19.8 percent over 12 months.

PORTLAND, IN – Safety on construction sites has improved greatly over the past 50 years. However, the latest report by OSHA (Occupational Safety and Health Administration) shows that construction tops the most dangerous occupations in the US for fatal injuries. One of the main causes of fatal incidents for workers is being struck by a moving vehicle. In fact, OSHA states that approximately 75% of struck-by fatalities involve heavy equipment such as trucks or cranes.

Laws for occupational safety, enforced and regulated by OSHA, provide comprehensive information on the standards that should be put in place by companies operating in the construction industry – those found guilty of breaching these rules face hefty fines. In 2021, Atlantic Coast Utilities LLC/Advanced Utilities Inc. was cited for 28 violations of the regulations and ordered to pay more than $1.3 million in fines after two employees were struck and killed by a dumper truck. 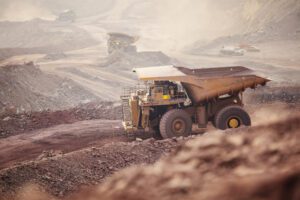 In a statement, OSHA said the violations included “the company’s refusal to train the two fatally injured employees and other workers to recognize and avoid work-related hazards” and that the company also “failed to conduct worksite inspections to identify and correct hazards, including the risks of being struck by construction vehicles.”

Clearly, vehicle safety should always be taken seriously. But regulations can also be open to interpretation. Certainly, there are question marks over the duties and responsibilities of companies, operators and individuals when it comes to ensuring hazards posed by vehicles on worksites are prevented.

Large construction vehicles are notorious for having complex and numerous blind spots and visibility has long been an issue for drivers and workers on the ground.

The OSHA Regulations state that no contractor or subcontractor for any part of the contract work shall require any laborer or mechanic employed in the performance of the contract to work in surroundings or under working conditions which are unsanitary, hazardous, or dangerous to his health or safety.

The rules relating to material handling equipment also require that scrapers, loaders, crawler or wheel tractors, bulldozers, off-highway trucks, graders, agricultural and industrial tractors, and similar equipment should be fitted with audible alarms. But what does this mean?

While the regulations don’t indicate precisely what the best type of alarm is or how this should be applied, it is clear that operators and their drivers have a legal obligation to ensure people are not endangered by vehicles under their control. In the event of an incident, an operator or driver could be prosecuted and face hefty fines if they were found to be in breach of these rules. So how can operators and drivers ensure they do not violate these rules?

Corey Heniser is a vehicle safety expert and CEO of Brigade Electronics INC, a supplier of safety devices and solutions for construction vehicles. He said: “Construction sites can be extremely challenging and unpredictable environments. Therefore, maintaining safety at all times can be very difficult. On construction sites, the need for safety is paramount, particularly as the slightest mistake can have devastating consequences.

“A variety of technologies are helping to address the problem of restricted visibility and blind spots on vehicles operating in construction sites,” Heniser continued. “One of these includes the very latest RFID (Radio Frequency Identification) technology, such as Brigade’s ZoneSafe proximity warning system, which will be launched in the US later this month.”

ZoneSafe uses vehicle-mounted antennas that communicate with detection tags, which can be worn by workers or placed on objects or property. When a tag enters a detection zone, the vehicle operator will automatically receive a visual and audible alert via the in-cab control unit, which will enable them to take the necessary action. Tags worn by workers on foot will also vibrate to warn of an approaching vehicle.

Since ZoneSafe uses RFID technology, the tags will be detected regardless of obstructions, blind spots, adverse weather conditions or poor visibility. Each tag can be uniquely identified and linked to individuals or objects and does not require a line-of-sight to alert the operator of potential obstruction.

“This technology is ideal for all types of construction vehicles that frequently operate within close proximity of workers and other machines,” Heniser added. “The system provides fast, reliable and accurate data exchange without any limitation on the number of tags or antennas in operation, making it perfect for large areas like busy construction sites.”

ARLINGTON, VA – The construction industry added 13,000 jobs in June as the number of jobseekers with construction experience plunged to a record low for the month according to an analysis of federal employment data released today by the Associated General Contractors of America. Association officials said the industry would likely have added even more jobs in June had it not been for the shortage of available workers.

“Although nonresidential contractors were able to add employees in June, the industry needs more as demand for projects is outpacing the supply of workers,” said Ken Simonson, the association’s chief economist. “With industry unemployment at a record low for June and openings at an all-time high for May, it is clear contractors can’t fill all the positions they would like to.”

The unemployment rate among jobseekers with construction experience tumbled from 7.5 percent in June 2021 to 3.7 percent last month, the lowest rate for June in the 23-year history of the data, the economist noted. The number of unemployed construction workers fell by 345,000, or 47 percent, to 385,000, suggesting there are few experienced jobseekers left to hire.

There were 466,000 construction-industry job openings at the end of May, a jump of 130,000 or 39 percent from a year earlier and the largest May total since that series began in 2000, Simonson added, citing government data released on Wednesday.

Remember the Basics: The Implied Covenant of Good Faith and Fair Dealing

NEWARK, N.J. - I learned to think of a contract as basically being a handshake, though I am in no way saying that detailed contracts are not needed.

NEWARK, N.J. - I learned to think of a contract as basically a handshake, though I am in no way saying that detailed contracts are not needed. In that regard, I always think of Robert Frost, and how “Good fences make good neighbors.”

FORT LAUDERDALE, FL - The White House announced that $110 billion of the trillion-dollar Infrastructure Investment & Jobs Act (IIJA) has been distributed to states, with another $100 billion available to fund infrastructure projects.